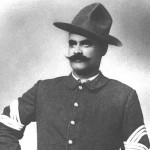 Brown was born in 1859 in Spotsylvania County, Virginia. On May 11, 1889, he was serving as a sergeant in Company C of the 24th Infantry Regiment when his unit was involved in an engagement with robbers in Arizona during the Indian Wars. His actions during the engagement earned him the medal, America’s highest military decoration.

The medal was awarded on February 19, 1890 and his citation reads: “Although shot in the abdomen, in a fight between a paymaster’s escort and robbers, did not leave the field until again wounded through both arms.”