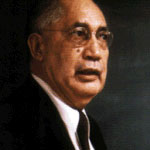 Brown published his first book of poetry, “Southern Road,” in 1933. Although that work was praised at the time, he was unable to find a publisher for his second volume and did not publish any new poetry until 1975. His poetic work was influenced in content, form, and cadence by African American music and often dealt with race and class in the United States. Brown’s 1937 works “The Negro in American Fiction” and “Negro Poetry and Drama” are considered foundation texts for the study of African American literary history. In 1984, the District of Columbia named Brown its first poet laureate, a position he held until his death.