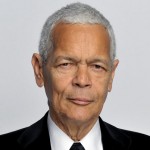 In 1971, Bond earned his Bachelor of Arts degree in English from Morehouse College. Also in 1971, Bond co-founded the Southern Poverty Law Center and served as president from 1971 to 1979. In the 1980s and 1990s, Bond taught at several universities, including American, Drexel, and Harvard. From 1998 to 2010, he served as chairman of the NAACP and in 2009 received the organization’s Spingarn Medal. Bond has been awarded 25 honorary degrees and today is a Distinguished Adjunct Professor at American University and a faculty member in the history department at the University of Virginia.