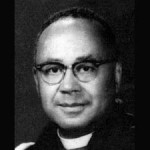 Burgess earned his Bachelor of Arts and Master of Arts degrees in social work from the University of Michigan in 1930 and 1931, respectively.

He earned his Bachelor of Divinity degree from Episcopal Theological School in 1934. Burgess was ordained to the priesthood in 1935 and later put in charge of a church outside of Cincinnati that he described as “the poorest of the poor.” There he administered a social service center, medical clinic, and day school in an effort to make the church a place that ministered to the whole person. From 1951 to 1956, Burgess served at the Washington National Cathedral where he used the national pulpit to heighten the social conscience of the Episcopal Church.

In 1962, Burgess was elected an assisting bishop of the Episcopal Diocese of Massachusetts and in 1970 he was installed as the diocese’s bishop, making him the first African American to head a diocese. After retiring in 1975, Bishop Burgess taught at Yale University’s Berkeley Divinity School and served as board chairman at St. Augustine’s College. He published his autobiography, “The Reminiscences of an American Scholar,” in 1966 and died August 24, 2003.