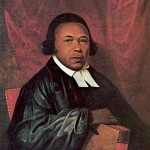 Together with Richard Allen, Jones was one of the first African Americans licensed to preach by the Methodist Church. In 1787, they founded the Free African Society, conceived as a non-denominational mutual aid society to help newly freed enslaved people in Philadelphia, Pennsylvania.