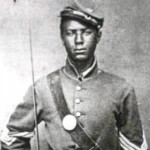 Smith was born enslaved on September 3, 1843 in Kentucky. With the outbreak of the Civil War, Smith’s owner joined the Confederate military with the intention of taking Smith with him.

When Smith learned of his intentions, he escaped and joined the Union Army. By November 30, 1864, Smith was serving as a corporal in the 55th Massachusetts Volunteer Infantry. On that day, he participated in the Battle of Honey Hill in South Carolina and his actions during the battle earned him the medal, America’s highest military decoration. His citation partially reads, “Forced into a narrow gorge crossing a swamp in the face of the enemy position, the 55th’s Color-Sergeant was killed by an exploding shell, and Corporal Smith took the Regimental Colors from his hand and carried them through heavy grape and canister fire.

Although half of the officers and a third of the enlisted men engaged in the fight were killed or wounded, Corporal Smith continued to expose himself to enemy fire by carrying the colors throughout the battle. Through his actions, the Regimental Colors of the 55th Infantry Regiment were not lost to the enemy.” Smith was promoted to color sergeant before leaving the army. Smith was initially nominated for the medal in 1916, but was denied. It was not until January 16, 2001 that President William Clinton presented the medal to Smith’s descendants at a White House ceremony.