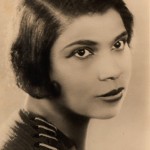 Ray was born January 13, 1850 in New York City. After graduating from the Institution for the Education of Colored Youth, she attended Howard University where she was a student and teacher.

In 1872, Ray graduated from Howard University School of Law with a specialization in commercial law and was admitted to the bar in the District of Columbia. As a “colored woman lawyer,” she was unable to sustain a practice. By 1879, she had returned to New York to teach in the public schools. Ray was also an advocate for women’s suffrage. She was a delegate to the 1876 conference of the National Women’s Suffrage Association.