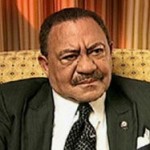 Cheek was born December 4, 1932 in Roanoke Rapids, North Carolina. He served in the United States Air Force and was honorably discharged in 1951. He earned his Bachelor of Arts degree in sociology and history from Shaw University in 1955, his Master of Divinity degree from Colgate Rochester University in 1958, and his Ph.D. from Drew University in 1962.

Cheek was appointed president of Shaw University in 1963 and in 1968 was appointed president of Howard University. During his tenure at Howard, the student population increased by 3,500 as well as the number of schools, research programs, full-time faculty, and Ph.D. programs. Howard’s budget increased from $43 million to $417 million. Cheek was named Washingtonian of the Year in 1980 and in 1983 was presented the Presidential Medal of Freedom, the nation’s highest civilian honor, by President Ronald Reagan. Cheek retired as president of Howard in 1989.