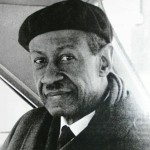 Porter was born December 22, 1905 in Baltimore, Maryland. After earning his Bachelor of Science degree from Howard University in 1927, he accepted a position at the university as instructor of painting and drawing.

In 1933, he received the Schomburg Portrait Prize from the Harmon Foundation for his painting “Woman Holding a Jug” (1930). In 1937, he earned his Master of Arts degree in art history from New York University and in 1943 he published “Modern Negro Art,” the first comprehensive study in the United States of African American art. Porter taught at Howard for more than 40 years and was the director of The Art Gallery from 1953 to 1970. In 1965, he was selected by the National Art Gallery as one of the best art teachers in the nation and was presented the award by First Lady Lady Bird Johnson.