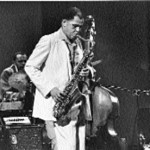 Gordon played the clarinet from the age of 13 before switching to the saxophone at 15.

Gordon returned to the United States in 1976. In 1987, he starred in the movie “Round Midnight” which earned him an Academy Award nomination for Best Actor. In 1978 and 1980, he was voted Jazz Album of the Year for 2 albums and Tenor Saxophonist of the Year by Down Beat Magazine and in 1980 he was inducted into the Down Beat Jazz Hall of Fame. In 1986, Gordon was designated a NEA Jazz Master, the highest honor the nation bestows on a jazz musician, by the National Endowment for the Arts and he died April 25, 1990.