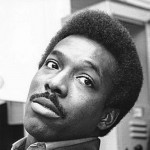 In 1955, Pickett moved to Detroit, Michigan where he joined a gospel group and developed his forceful, passionate style of singing.

In 1999, Pickett was nominated for a Grammy Award for his album “It’s Harder Now.” In 1991, Pickett was inducted into the Rock and Roll Hall of Fame and in 1993 he received the Pioneer Award from the Rhythm and Blues Foundation. Pickett died January 19, 2006.