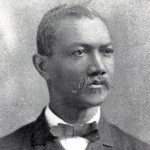 Augusta attempted to study medicine at the University of Pennsylvania, but was not allowed to due to his race.

Therefore, he enrolled at Trinity Medical College of the University of Toronto and in 1856 received a degree in medicine. Augusta remained in Toronto and established his medical practice, supervised staff at Toronto General Hospital, directed an industrial school, and founded the Provincial Association for the Education and Elevation of the Coloured People of Canada.

In 1860, he returned to the United States and in 1863 received a major’s commission as surgeon for African American troops in the Union Army, making him the first African American physician and the highest ranking African American in the army. After the war, Augusta accepted an assignment with the Freedman’s Bureau, heading Lincoln Hospital.

He also served on the staff of the Washington, D.C. Freedman’s Hospital from 1868 to 1877. Augusta died December 21, 1890 and was interred with full military honors at Arlington National Cemetery.