By Chimsima Zuhri on November 13, 2010 in African American History, November 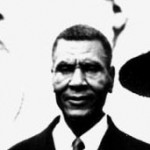 November 13, 1942 Leonard Roy Harmon, the first African American to have a Navy ship named in his honor, died.

Harmon was born January 21, 1917 in Cuero, Texas. He enlisted in the Navy in June, 1939 and in October of that year was assigned to the USS San Francisco. By 1942, Harmon had advanced to mess attendant first class.

On November 12, 1942, the Japanese began the battle of Guadalcanal by crashing a plane into the USS San Francisco, killing or injuring 50 men. The next day they raked the USS San Francisco with gunfire, killing nearly every officer on the bridge. Disregarding his own safety, Harmon helped to evacuate the wounded. He was killed while shielding a wounded shipmate from gunfire with his own body.

For “extraordinary heroism,” he was posthumously awarded the Navy Cross, the highest medal that can be awarded by the United States Navy. On July 25, 1943, the USS Harmon, a destroyer escort, was launched.