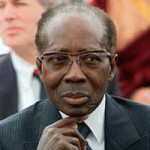 Senghor was born October 9, 1906 in Joal, Senegal. His father was a successful businessman and this allowed him to attend the best schools in Senegal and earn a scholarship to study in France where he graduated from the University of Paris. After graduation, he taught at the Universities of Tours and Paris. During this time, he and other African intellectuals conceived the idea of “negritude” in response to the racism in France. It was meant as a celebration of African culture and character.

In 1939, Senghor enlisted as a French army officer and the following year he was taken prisoner by the Germans and spent two years in different prison camps. After the war ended in 1945, Senghor took the position of dean of the linguistics department at the Ecole Natioanale de la France d’Outre-Mer, a position he held until 1960. The Republic of Senegal gained its independence from France in 1960 and Senghor was elected the first president, a position he held until his resignation in 1980.

In 1964, Senghor published the first volume of a series of five titled “Liberté” which contained speeches and essays. The fifth volume was published in 1993. Other works by Senghor include “Songs for Naeett” (1949), “Ethiopiques” (1956), and “Nocturnes” (1961). In 1983, he was elected a member of l’Académie française, the first African to sit at the Academie. In 1996, the airport in Dakar was renamed Aéroport International Léopold Sédar Senghor.