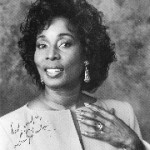 Sinclair was born April 28, 1938 in Kingston, Jamaica. She was a teacher in Jamaica until 1968, when she moved to New York City to pursue an acting career. In 1977, she appeared in the television mini-series “Roots,” a role which earned her an Emmy nomination for Best Actress in a Drama. From 1979 to 1986, she appeared in the series “Trapper John, M. D.” and earned three Emmy nominations for her work on that show. In 1988, she appeared in the film “Coming to America” and in 1990 she was a regular in the television series “Gabriel’s Fire,” for which she won the 1991 Emmy Award for Best Supporting Actress in a Dramatic Series. A businesswoman also, Sinclair was an art dealer, chairwoman of clothing manufacturer Madge Sinclair, Inc., and the owner of an income tax service.