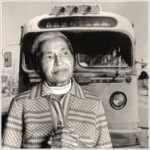 December 1, 1955 Rosa Louise McCauley Parks refused to give up her seat on a Montgomery, Alabama city bus and quietly set off a social revolution.

On the Montgomery city buses, the first ten seats were permanently reserved for white passengers. Mrs. Parks was seated in the first row behind those seats.

When the bus became crowded and more seats were needed for the white passengers, the bus driver ordered Mrs. Parks and three other black passengers to move back in the bus. When Mrs. Parks refused, she was arrested and charged with “refusing to obey orders of bus driver.” Her arrest set off a bus boycott that lasted 381 days and brought the Rev. Martin Luther King, Jr. to national prominence. For her quiet act of defiance, Mrs. Parks became known as the “Mother of the Civil Rights Movement.”