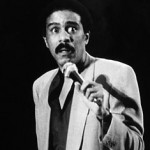 After his discharge from the Army in 1960, Pryor began working as a professional comic in clubs throughout the Midwest. In 1963, he moved to New York City and began to gain national recognition and appear on television variety shows such as “The Ed Sullivan Show” and “The Tonight Show.”

Pryor published his autobiography, “Pryor Convictions and Other Life Sentences,” in 1995. In 1998, Pryor won the first Mark Twain Prize for American Humor from the John F. Kennedy Center for the Performing Arts. Pryor died December 10, 2005 and was posthumously awarded the Grammy Lifetime Achievement Award in 2006. Pryor is listed number one on Comedy Central’s list of all-time greatest stand-up comedians.