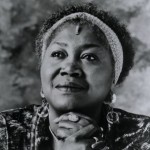 Odetta was born December 31, 1930 in Birmingham, Alabama. Her first professional experience was in musical theater in 1944 and in 1949 she joined the “Finian’s Rainbow” touring company. She began her solo career in 1956 with “Odetta Sings Ballads and Blues” and followed with “At the Gates of Horn” (1957), and “Odetta Sings Folk Songs” (1963).

In 1999, President William Clinton presented Odetta with the National Medal of Arts, the highest honor bestowed on an individual artist by the United States, and in 2005 the Library of Congress honored her with a Living Legend Award.