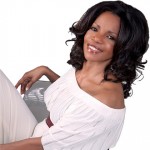 Moore earned a bachelor’s degree in musical education from Montclair State Teacher’s College and taught music for a year in the Newark Public School System. She began her performing career in 1967 in the cast of “Hair.”