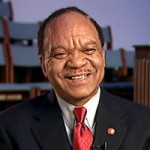 In 1959, he became pastor of the New Bethel Baptist Church where he served until 2009. About the same time, he joined the Southern Christian Leadership Conference where he helped to coordinate the 1963 March on Washington for Jobs and Freedom, the 1965 Selma to Montgomery Voting Rights March, and the Meredith Mississippi Freedom March in 1966. Also in 1966, President Lyndon B. Johnson appointed him vice chairman of the White House Conference on Civil Rights.

In 1970, Fauntroy was elected the first non-voting delegate to Congress from Washington, D.C. He was re-elected five times until he stepped down in 1990. During his time in Congress, he was a founding member of the Congressional Black Caucus and served as chairman in 1981. In 1984, he received the Hubert H. Humphrey Humanitarian Award from the National Urban Coalition.