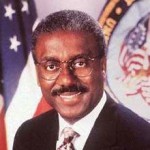 Brown was born March 27, 1944 in Detroit, Michigan but grew up in Chicago, Illinois. He enlisted in the United States Marine Corps in 1963 and reached the rank of corporal. While serving during the Vietnam War, he was seriously injured resulting in his right arm being partially paralyzed for life.

After his military service, Brown graduated with honors from the City Colleges of Chicago. In 1967, he joined the staff of Disabled American Veterans and in 1989 became the DAV’s first African American director. He served in that position until 1993 when he was selected by President William Clinton to become Secretary of Veterans Affairs. Brown served in that capacity until 1997 and during his tenure expanded services offered to female veterans, homeless veterans, and veterans who were ill due to chemical exposure in Vietnam or the Gulf War.

In 2000, Brown was given the Leader’s in Furthering Education (LIFE) Memorial Foundation’s Presidential Unsung Hero Award which “seeks to honor an outstanding veteran who had demonstrated heroic efforts in surmounting disability and whose contributions to society serve as an inspiration to others.” That same year, he was selected as the Outstanding Disabled Veteran of the Year by the Disabled American Veterans. The Jesse Brown Veteran Administration Medical Center in Chicago is named in his honor.