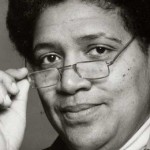 Legally blind, Lorde wrote her first poem when she was in the eighth grade. She earned her Bachelor of Arts degree in library science from Hunter College in 1959 and her Master of Library Science degree from Columbia University in 1964.