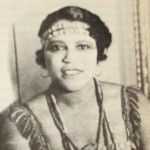 August 13, 1986 Caterina Jarboro, the first black opera singer to sing on an opera stage in the United States, died.

Jarboro was born Katherine Lee Yarborough in Wilmington, North Carolina. At the age of 13, she was sent to Brooklyn, New York to study music. Jarboro also studied in Paris and in 1929 made her grand opera debut in Milan, Italy in “Aida.”

She continued to sing in France and Italy until 1933 when she joined the Chicago Opera Company and became the first Black to sing on an opera stage in the U. S. After her final engagement with the Chicago Opera in 1935, Jarboro sang for four seasons in Europe. She returned to the U. S. in 1941 and retired as a singer in 1955.