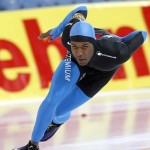 Davis learned to roller skate at the age of two and at six years old was enrolled at the Evanston Speed Skating Club. At 16, Davis was invited to Lake Placid to participate in a development program for young speed skaters and after a year he moved to Marquette, Michigan to further his training.

In 2000, Shani Davis made history by becoming the first U. S. skater to make the long and short track teams at the Junior World Teams, a feat he accomplished again in 2001 and 2002. At the 2006 Winter Olympic Games in Turin, Italy, Davis won the Gold medal at 1000 meters and the Silver medal at 1500 meters. He repeated that performance at the 2010 Winter Olympic Games in Vancouver, Canada. Davis has set eight world records and currently holds three.