By Chimsima Zuhri on February 13, 2012 in African American History, February 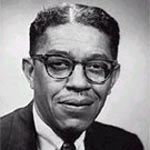 Goode earned his Bachelor of Arts degree from the University of Pittsburgh and later worked as a boys work director at the YMCA.

There he spearheaded the fight against discrimination in the Pittsburgh branches of the YMCA. In 1948, Goode joined the Pittsburgh Courier where he worked for 14 years. In 1952, he was named station news director for radio station WHOD. In 1962, Goode became the first black news correspondent for ABC television covering the United Nations. His first assignment was covering the Cuban Missile Crisis and he distinguished himself with incisive reports during the long hours of debate.

In 1971, Goode became the first African American member of the Radio and Television News Directors Association. In 1990, Goode was inducted into the National Association of Black Journalist Hall of Fame. Goode died September 12, 1995.