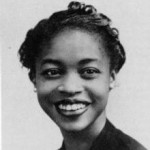 Walker was born July 7, 1915 in Birmingham, Alabama. She earned her Bachelor of Arts degree from Northwestern University in 1935 and began working with the Federal Writer’s Project. In 1940, she earned her Master of Arts degree in creative writing from the University of Iowa and in 1965 she returned to that school to earn her Ph. D.

In 1942, Walker published her most popular poem, “For My People,” which won the Yale Series of Younger Poets Competition. Walker served as a literature professor at what is now Jackson State University from 1949 to 1979. In 1966, her novel “Jubilee” was published to critical acclaim. In 1968, Walker founded the Institute for the Study of History, Life, and Culture of Black People (now the Margaret Walker Alexander National Research Center) at Jackson State.