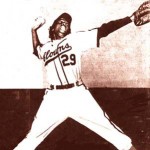 Stone was born Marcenia Lyle on July 17, 1921 in Saint Paul, Minnesota. She began playing baseball at the age of ten and by the age of 15 was playing for a men’s semi-professional team. During World War II, she moved to San Francisco and played with a black semi-pro barnstorming team.

In 1953, Stone was signed to play with the Indianapolis Clowns of the Negro League. The next year, she played with the Kansas City Monarchs. Stone retired from baseball after the 1954 season and moved to California where she worked as a nurse. Stone was inducted into the Women’s Sports Hall of Fame in 1993 and her biography, “Curveball: The Remarkable Story of Toni Stone,” was published in 2010.