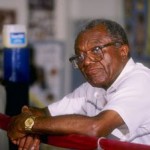 Futch was born August 9, 1911 in Hillsboro, Mississippi, but raised in Detroit, Michigan. In 1932, he won the Detroit Athletic Association Lightweight Championship and in 1933 he won the Detroit Golden Gloves Championship. A heart murmur prevented him from turning professional, therefore he began training fighters.

Over his career, Futch trained 21 boxing champions, including Joe Frazier, Ken Norton, Alexis Arguello, Michael Spinks, and Riddick Bowe. Futch was named Trainer of the Year in 1991 and 1992 by the Boxing Writers Association of America. Futch retired in 1998 and is widely considered one of the top three trainers who ever lived. He was inducted into the International Boxing Hall of Fame in 1994.