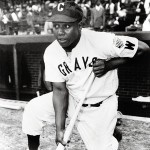 Gibson was born December 21, 1911 in Buena Vista, Georgia. He made his professional debut with the Homestead Grays, the preeminent Negro League team of that time, in 1930.

The true statistical achievements of Negro league players may be impossible to know because complete statistics and game summaries were not kept, but it is claimed that Gibson hit almost 800 home runs over his 17-season professional career. He also was a ten-time All-Star and won two Negro League championships. Gibson died three months before Jackie Robinson became the first black player in modern major league history.

Gibson was posthumously inducted into the Baseball Hall of Fame in 1972 and in 2000 he was ranked 18th on The Sporting News list of the 100 Greatest Baseball Players. Biographies of Gibson include “Josh Gibson: A Life in the Negro Leagues” (1978) and “Josh Gibson: The Power and The Darkness” (2004).