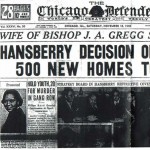 The ruling states that whites could not bar African Americans from white neighborhoods, but did not rule that restrictive covenants based on race were void.

It ruled for Hansberry on a legal technicality that Lee did not represent the entire class because a number of the homeowners (approximately 46%) disagreed with the covenant. Restrictive covenants based on race were completely outlawed by the U.S. Supreme Court on May 3, 1948 in the case of Shelley v. Kraemer.