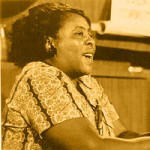 Hamer was born October 6, 1917 in Sunflower, Mississippi. In 1961, without her knowledge or consent, Hamer was sterilized by a white doctor as part of the state of Mississippi’s plan to reduce the number of poor blacks in the state. In 1962, she began working with the Student Nonviolent Coordinating Committee (SNCC) to register African Americans to vote.