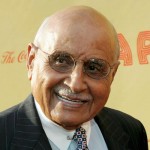 Sutton was born November 24, 1920 in San Antonio, Texas. During World War II, Sutton served as an intelligence officer with the Tuskegee Airmen. He attended Prairie View University, Tuskegee Institute, and Hampton Institute before earning his law degree in 1950 from Brooklyn Law School.

From 1964 to 1966, he served in the New York State Assembly where he was instrumental in getting funding to establish the Schomburg Center for Research in Black Culture. From 1966 to 1977, he served as Manhattan borough president. In 1971, Sutton co-founded the Inner City Broadcasting Corporation which purchased New York City’s first African American-owned radio station.

Sutton served as president of the corporation from 1972 to 1991. In 1980, he purchased and initiated the revitalization of the Apollo Theater in Harlem and in 1987 began producing the television show, “Showtime at the Apollo.” In 1987, Sutton was awarded the NAACP Spingarn Medal.