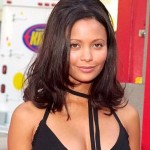 Newton made her film debut in “Flirting” (1991) and gained international recognition for her role as Sally Hemings in the film “Jefferson in Paris” (1995).