By Chimsima Zuhri on June 16, 2011 in African American History, June 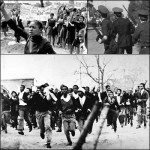 On that day school children in Soweto protested the imposition of the Afrikanns language for instruction. Before they could disperse, police opened fire on the students. Before it was over, 23 people died. A news photograph of a dying Hector Pieterson, killed at the age of 12, was published around the world and became the iconic image of the uprising.

Today, June 16 is known as National Youth Day, a day on which South Africans honor young people and bring attention to their needs. On June 16, 2002 the Hector Pieterson Memorial and Museum was opened near the place where he was shot.