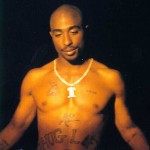 Shakur was named after Tupac Amaru II, a Peruvian revolutionary who led an indigenous uprising against Spain and was subsequently executed. In 1986, his family moved to Baltimore where Shakur attended the Baltimore School for the Arts and studied acting, poetry, jazz, and ballet.

Shakur died September 13, 1996 as the result of a drive-by shooting in Las Vegas. Several of his albums were released posthumously, including “R U Still Down? (Remember Me)” (1997), “Until the End of Time” (2001), and “Loyal to the Game” (2004). Shakur is recognized in the Guinness Book of World Records as the highest selling rap artist with over 75 million albums sold worldwide. In 2002, he was posthumously inducted into the Hip Hop Hall of Fame and in 2003 the Academy Award-nominated documentary “Tupac: Resurrection” was released.