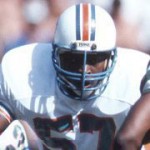 Stephenson played college football at the University of Alabama where he was an All-American. Coach Bear Bryant called Stephenson the best player he had ever coached, regardless of position. Stephenson was selected by the Miami Dolphins in the 1980 NFL Draft and over his eight-season professional career was a five-time Pro Bowl selection.

In 1985, Stephenson received the Walter Payton Man of the Year Award, which annually honors a player’s volunteer and charitable work and his excellence on the field, and in 2005 he was named the Walter Camp Man of the Year, which is annually given to an individual who has been closely associated with the game of football. The recipient must have attained a measure of success, must have contributed to the public service, and must have a reputation for integrity.

The Dwight Stephenson Foundation was founded in 2007 to generate increased funding for charities that provide educational, health, and human services to support the needs of children and families.