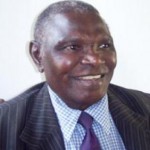 October 28, 1922 Simon Vengai Muzenda, Zimbabwean politician, was born In the Gutu District of what was then Rhodesia.

After completing his carpentry courses, Muzenda started his own carpentry business and became active in politics, eventually becoming administrative secretary of the Zimbabwe African National Union. His political activity led to him being imprisoned several times between 1955 and 1971.

After Zimbabwe gained independence from the British government in 1980, Robert Mugabe was elected prime minister and he appointed Muzenda the deputy prime minister and foreign minister. In 1987, Muzenda was appointed first vice president, a position he held until his death on September 30, 2003.