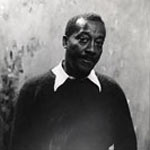 In the late 1940s, his work became increasingly abstract, including “Tenement I” (1952), “Harlem Turns White” (1955), and “Night Walker No. 2” (1956). His painting “Migrating Birds” (1954) won the Popular Prize at the 1955 Carnegie International Exhibition. In 1953, Lewis was a founding member of the SPIRAL Group which sought to define how African American artists could contribute to the Civil Rights Movement.

In 1972, Lewis received a fellowship from the National Endowment for the Arts and in 1975 he received a Guggenheim Fellowship. Lewis’ paintings are in the collections of numerous major museums, including the Museum of Modern Art and the Art Institute of Chicago.