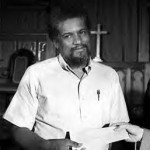 Foreman was born October 4, 1928 in Chicago, Illinois. He served in the United States Air Force in Okinawa during the Korean War and was discharged in 1952. Forman earned his undergraduate degree from Roosevelt University in 1957 and spent most of the late 1950s working as a journalist and teacher.

From 1961 to 1965, he served as executive secretary of the Student Nonviolent Coordinating Committee. In 1969, his “Black Manifesto” was adopted at the Black Economic Development Conference held in Detroit, Michigan. During the 1970s and early 1980s, Forman completed graduate work at Cornell University and in 1982 received his Ph.D. from the Union of Experimental Colleges and Universities.

Forman wrote several books, including “Sammy Younge Jr.: The First Black College Student to Die in the Black Liberation Movement” (1969), “The Making of Black Revolutionaries” (1972), and “Self Determination: An Examination of the Question and its Application to the African American People” (1984).