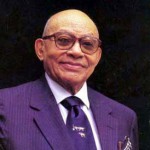 Nabrit was born February 21, 1905 in Macon, Georgia. He earned his Bachelor of Science degree in biology from Morehouse College in 1925 and his Master of Science degree and Ph. D. from Brown University in 1928 and 1932, respectively. He was the first African American to be awarded a Ph. D. by Brown. Nabrit taught zoology at Morehouse from 1925 to 1931 and in 1932 became chairman of the biology department at Atlanta University.

He became the dean of the graduate school of arts and sciences at Atlanta in 1947 and served in that position until 1955, when he became the second president of Texas Southern University. In his eleven years at Texas Southern, Nabrit more than doubled the enrollment of black students and encouraged their participation in the Civil Rights Movement. He declared that no student would be expelled for civil rights activities while he was president of the university. From 1956 to 1962, Nabrit served on President Eisenhower’s National Science Board and in 1966 President Lyndon Johnson appointed him to the Atomic Energy Commission, the first African American on that commission.

In 1967, Nabrit founded and became director of the Southern Fellowship Fund, established to support and mentor black students studying for doctorates. He worked for the fund until his retirement in 1981. Between 1967 and 1972, Nabrit served as Brown University’s first black trustee and in 1985 the university established the Nabrit Fellowship to assist graduate students from minority groups.