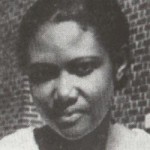 Young was born in 1899 in Clifton Forge, Virginia and raised in Burgettstown, Pennsylvania. She earned her bachelor’s degree from Howard University in 1923 and her master’s degree from the University of Chicago in 1926.

In 1924, her article “On the Excretory Apparatus in Paramecium” was published in the journal Science, making her the first African American woman to research and professionally publish in her field. In 1940, she earned her Ph. D. in Zoology from the University of Pennsylvania.