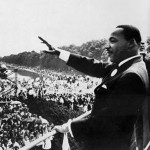 King entered Morehouse College at the age of 15 and earned his Bachelor of Arts degree in sociology in 1948. He then earned his Bachelor of Divinity degree from Crozer Theological Seminary in 1951 and his Ph.D. from Boston University in 1955. King led the 1955 Montgomery Bus Boycott and in 1957 helped found the Southern Christian Leadership Conference, serving as its first president.

King was the 1957 recipient of the NAACP Spingarn Medal. In 1963, King led the March on Washington for Jobs and Freedom and delivered his “I Have a Dream” speech. In 1964, King became the youngest person to receive the Nobel Peace Prize for his work to end racial segregation and discrimination through civil disobedience and other non-violent means. King was assassinated on April 4, 1968 in Memphis, Tennessee. In 1971, King was posthumously awarded the Grammy Award for Best Spoken Word Album for “Why I Oppose the War in Vietnam.”

He was posthumously awarded the Presidential Medal of Freedom, the nation’s highest civilian honor, by President Jimmy Carter in 1977 and Congressional Gold Medal in 2004. In 1980, the Department of Interior designated his boyhood home and several nearby buildings the Martin Luther King, Jr. National Historic Site.

On November 2, 1983, President Ronald Reagan signed a bill creating a federal holiday to honor King and on January 17, 2000 Martin Luther King Jr. Day was officially observed in all 50 states for the first time. More than 750 cities in the United States have streets named after King. A memorial to King at the National Mall in Washington, D.C. opened in 2011. “The Autobiography of Martin Luther King, Jr.” was published in 1998.