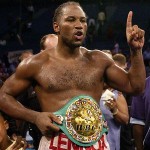 In 1993, Lewis won the WBC heavyweight championship, making him the first world heavyweight titleholder from Britain in the 20th century, and in 1999 he became the undisputed Heavyweight Champion of the World. That year, he was also voted the BBC Sports Personality of the Year. Lewis retired from boxing in 2003 with a record of 41 wins, 2 losses, and 1 draw. In 2008, Lewis was inducted into Canada’s Sports Hall of Fame and in 2009 he was inducted into the International Boxing Hall of Fame.