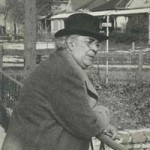 Harrison was born September 28, 1864 in London, Ontario, Canada, the son of formerly enslaved parents who had escaped to Canada via the Underground Railroad.

As a young man, Harrison moved to Detroit, Michigan and began dramatic studies at the Detroit Training School of Dramatic Arts. From 1892 to 1896, Harrison traveled the country performing as a dramatic reader. His repertoire included works from Shakespeare and the poetry of Paul Laurence Dunbar. Harrison became well known for playing “de Lawd” in the play “The Green Pastures.” The play opened on Broadway in 1930 and he appeared in over 1,650 performances. This was his only professional appearance in a play.