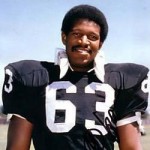 Eugene Thurman Upshaw was born August 15, 1945 in Robstown, Texas. He played college football at Texas A&I University and earned his Bachelor of Science degree in 1968. Upshaw was selected by the Oakland Raiders in the 1967 AFL Draft. Over his 15 season career, he was a six-time All-Pro and two-time Super Bowl champion.

In 1987, Upshaw was inducted into the Pro Football Hall of Fame and in 2004 the NCAA inaugurated the Gene Upshaw Division II Lineman of the Year Award. Upshaw was an active member of the bargaining committee for the NFL Players’ Association and in 1983 became its executive director. He served in that capacity until his death.

Upshaw is widely acclaimed for his role in ensuring the stability and success of professional football in the 1990s and early 2000s.