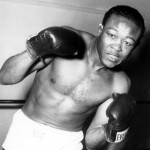 Gavilan was born Gerardo Gonzalez on January 6, 1926 in Camaguey, Cuba. He started boxing professionally in 1943 and won the World Welterweight Championship in 1951.

In 1952, he successfully defended his title in the first boxing match between black and white fighters in segregated Miami, Florida. Gavilan retired in 1958 with a record of 106 wins, 30 losses, 6 draws, and 1 no contest and with the distinction of being one of the few fighters that was never knocked down or out in their professional career. Gavilan was inducted into the International Boxing Hall of Fame in 1990.