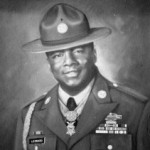 Leonard was born November 26, 1929 in Eutaw, Alabama and served in the United States Army during the Korean and Vietnam Wars.

On this date, Leonard was serving as a platoon sergeant with Company B, 1st Battalion, 16th Infantry, 1st Infantry Division near Suoi Da, South Vietnam when his platoon came under attack. Leonard’s citation partially reads, “Although the platoon leader and several other key leaders were among the first wounded, P/Sgt. Leonard quickly rallied his men to throw back the initial enemy assaults.

During the short pause that followed, he organized a defensive perimeter, redistributed ammunition, and inspired his comrades through his forceful leadership and words of encouragement. Noticing a wounded companion outside of the perimeter, he dragged the man to safety but was struck by a sniper’s bullet which shattered his left hand. Refusing medical attention and continuously exposing himself to the increasing fire as the enemy again assaulted the perimeter, P/Sgt. Leonard moved from position to position to direct the fire of his men against the well camouflaged foe. Under the cover of the main attack, the enemy moved a machine gun into a location where it could sweep the entire perimeter.

P/Sgt. Leonard rose to his feet, charged the enemy gun and destroyed the hostile crew despite being hit several times by enemy fire. He moved to a tree, propped himself against it, and continued to engage the enemy until he succumbed to his many wounds. His fighting spirit, heroic leadership, and valiant acts inspired the remaining members of his platoon to hold back the enemy until assistance arrived.” President Lyndon B. Johnson presented the medal, America’s highest military decoration, to his family on December 19, 1968.