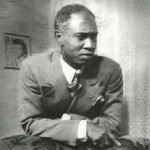 Shortly after receiving his undergraduate degree, Tolson took a position as English and speech instructor at Wiley College. He also served as the football coach, play director, and speech and debate coach. Under his direction, the debate team maintained a ten year winning streak, including winning the national championship over the University of Southern California which was the subject of the 2007 film “The Great Debaters.”

Tolson’s first book of poetry, “Rendezvous with America,” was published in 1944. In 1947, he was appointed the Poet Laureate of Liberia and in 1953 he published “Libretto for the Republic of Liberia.” Tolson also served as Mayor of Langston, Oklahoma from 1954 to 1960. Tolson died August 29, 1966. In 1970, Langston University founded the Melvin B. Tolson Black Heritage Center to collect material of Africans, African Americans, and the African diaspora. His biography, “Melvin B. Tolson, 1898 – 1966: Plain Talk and Poetic Prophecy,” was published in 1984.