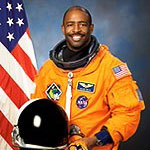 Melvin attended the University of Richmond on a football scholarship and earned his Bachelor of Science degree in chemistry in 1985.

In 1991, he earned his Master of Science degree in materials science engineering from the University of Virginia. Melvin was selected by the Detroit Lions in the 1986 NFL draft, but a couple of injuries ended his professional football career. In 1989, Melvin began working for the National Aeronautics and Space Administration and in 1998 he was selected as an astronaut.