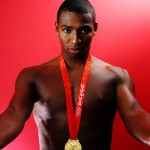 Jones learned to swim after he nearly drowned when he was five years old.

He turned professional in 2006 and swam a leg in the world record breaking 4 by 100 meter freestyle relay, making him the second African American to hold or share a world record in swimming. In 2008, Jones became the third African American to make the United States Olympic swimming team and at the Olympic Games in Beijing he won a Gold medal in the 4 by 100 meter freestyle relay.

In 2009, Jones set the American record in the 50 meter freestyle race. Working with USA Swimming Foundation’s Make a Splash Program, Jones is dedicated to helping minorities learn how to swim.